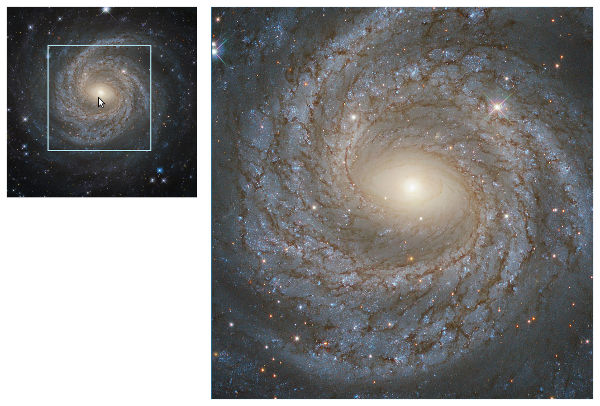 One of my favorite ways of improving my knowledge of "vanilla" JavaScript and the browser's DOM API is to create complex UI components without utilizing any libraries or frameworks. It's a great way to familiarize myself with the methods available for DOM manipulation, event handling, and information retrieval. Along the way, I always pick up a few tips and tricks to add to my front end toolbelt. The technique fits in nicely with my philosophy that one of the best ways to learn in programming is to "re-invent the wheel".

In this post, I'm going to walk through implementing an image zoomer component. It's basically what you use on a site like Amazon to get a closer look at an image by hovering your mouse over a thumbnail. I'll be building a slightly simplified implementation based on this implementation from my UI Components project (code here). Along the way, I'll touch on topics like listening to mouse events, getting an element's position within the viewport, and calculating the position of the zoomed image.

To keep things simple, we'll define our component as a JavaScript class whose constructor takes an image element. In the real world, a class like this can be hooked into a more declarative system for instantiating components. For example, in my original implementation, I define an <image-zoomer> custom element that I can use for creating instances.

So to start off, here's our class:

Setting up the DOM

Before we can start coding the logic to handle the behavior of the image zoomer, we need to modify our initialization logic to transform the DOM into the state we need it to be in. We'll need the following:

Now that we know what DOM structure we'll need, let's add the logic to set it up:

Say our initial HTML is the following:

Executing the JS code will change the DOM to the following structure:

Here are a few important points to note about the code above:

These APIs are some of the handiest built-in browser APIs for manipulating the DOM. They may not be as elegant as jQuery's API, but they certainly get the job done and done cheaply.

Note also that the createZoomBox() function is not yet complete, as we'll be adding logic to properly size the zoom box in an upcoming section.

Setting up the Styles

Now that we have the JS to initialize our component state and DOM structure, let's shift our focus for a moment to styling. We want to apply styling that will:

Here's our styling. Note that I've written it with Sass to keep it concise.

Here are some important points to note about our styling code:

A quick note on performance: We could have used display: none instead of opacity: 0 to hide the zoom box and the zoomed image. But opacity is a better choice for performance because it is one of the things the browser can use the GPU to animate, a process known as hardware acceleration. Using the GPU leads to smoother animation as the browser does not have to re-paint the areas of the screen that are animating. Instead, the browser paints the elements to be animated to "layers" that are uploaded to the GPU, which it can then animate. Note that the browser doesn't always create new layers for the GPU when you want it to, so you can force it to do so by setting certain properties like backface-visibility (in the future, will-change will be the official mechanism). For more on this, check out "High Performance Animations" on HTML5 Rocks.

The next step in building the image zoomer is to size the zoom box. We want to size it so it covers the same area on the original image that is visible in the zoom window. This sizing must be done dynamically in JavaScript so we can support variable widths for our layout (e.g. if it's placed somewhere smaller than its current max width of 600 pixels). Here's the relevant update to the code:

Here we add a new sizeZoomBox() function which we call at the end of the constructor. The function will be accessing the computed dimensions of the original image, the zoom window, and the zoomed image in order to calculate the zoom box's size. Therefore, it must be called after these elements have been added to the DOM. The function works as follows:

This gives us dimensions for the zoom box that are proportional to the zoomed image inside the zoom window. As far as DOM APIs go, we use the clientWidth and clientHeight properties to get the width and height of our elements in pixels, and we use the style property to set the zoom box's width and height. One additional consideration would be to re-run this operation if the user changes the size of the browser window. I'll leave that as an exercise for the reader.

A quick performance-related note: The code in its current state will cause a forced synchronous layout. What this means is that when we ask for the clientWidth and clientHeight of our elements, the browser will have to pause our JS and do layout calculations before it can give us those values. For our purposes this probably isn't a big deal, but too much of this kind of thing can cause layout thrashing. In my original implementation, I avoid the synchronous layout by lazily creating the zoom box element when the user first mouses over the image.

Now that we have everything laid out, let's get something interesting happening: moving the zoom box to follow the mouse cursor while it's over the original image.

The following code additions will set up our listener logic:

This gets us as far as showing the zoom box when the user mouses over the original image and switching from listening to mouse enter to mouse move. Important points to note:

The handleMouseMove method will be responsible for responding to mouse move events and either moving the zoom box or hiding it if the cursor has left the image. Moving the zoom box will require calculating a position that places it around the cursor.

Here's how the handleMouseMove code works:

In the requestAnimationFrame callback, it checks to see if the mouse event reports the cursor as within the image or not using the new isWithinImage utility function. It passes the imageBounds, which we've added a calculation for in the constructor using the getBoundingClientRect API method. This method, while not the most fun to type, is extremely useful in that it returns to you an object containing info on the element's position (bottom, left, right, top) and dimensions (height and width). One caveat of this method is that it gives you the element's position relative to the browser's viewport, not the beginning of the document. So if you want to know where the element is relative to the beginning of the entire document, you need to account for whether and by how much the page is scrolled. We do this using another utility function, toDocumentBounds, which uses window.scrollX and window.scrollY to determine how much the page is scrolled and adds those values to the appropriate data points for the element's position.

isWithinImage then uses then pageX and pageY properties of the mouse event, which tell where in the document the cursor was when the event occurred, to determine if the mouse has left the image or not. handleMouseMove uses the result to either call the updateUI method or the deactivate method, which we'll implement in the next couple of sections.

With those changes in place, the zoom box now appears when the mouse hovers over the original image, surrounds the cursor, and follows it as it moves over the image. Here are the important points to note about this code:

Next we need to hide the zoom box when the mouse leaves the original image. Additionally, we must switch our event listening back from mouse move to mouse enter so we'll know the next time the user hovers over the image. The logic for this is simple compared to what we've already implemented. We just need to implement the deactivate method to remove the active class from the zoom box (we'll also remove it from the zoom window to get that out of the way):

Containing the Zoom Box in the Image

At this point, we show, move, and hide the zoom box based on mouse movement. The final concern to address with the zoom box is keeping it from moving outside the original image when the mouse gets close to the image's edge. In general, the zoom box should surround the cursor with it in the middle. But once it hits the edge of the image it should move no further in that direction. Thankfully, this only requires a small update to the code that calculates the zoom box offset and the creation of one more utility. Here's the updated getZoomBoxOffset function and a new containNum utility:

The new lines in getZoomBoxOffset are the ones that call the new containNum utility. containNum simply takes a number, a lower bound number, and an upper bound number, and returns either the number or one of the bounds if the number is outside the bounds. getZoomBoxOffset uses it to adjust the x and y offsets for the zoom box so they can't move the zoom box outside the image. For example, it adjusts the X offset by passing the current X value, the left bound of the image, and the right bound of the image minus the width of the zoom box (to account for the horizontal position of the zoom box being set relative to its left edge, not its center).

The updateUI method now calls a new moveZoomedImage method, passing it the percentages of how much to move the zoomed image in the horizontal and vertical directions. It calculates these percentages by dividing the offset applied to the zoom box by the corresponding dimension of the original image (e.g. horizontal zoom box offset / width of original image).

There you have it: a working image zoomer component. If you want to play around with it more, I've posted the code from this walkthrough on CodePen. Let's recap what we've covered:

If you liked this post, note that I plan to write in the future on implementing tooltips and modals with vanilla JS. If you'd like to discuss this further, feel free to reach out to me on Twitter at @WillHPower.